Amid thunderous applause and a standing ovation, Numan Balic was conspicuously alone. 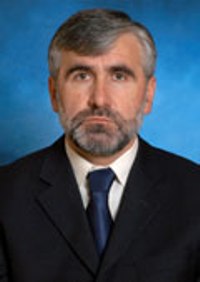 The frustrated representative of the Bosniak minority in Kosovo, holding a bunch of papers, stood in front of the speaker of the parliament demanding to speak against a U.N. plan that recommends independence for the disputed province.

He was a lone dissenting voice amid 100 lawmakers Thursday endorsing a resolution backing the proposal drafted by U.N. special envoy Martti Ahtisaari, the former Finnish president who mediated yearlong negotiations between ethnic Albanian and Serbian leaders. And he was not allowed to speak because lawmakers had agreed in advance that there would be no debate.

Balic insists his grievances had nothing to do with Kosovo's independence. In fact, the 48 year-old lawmaker, says he was defending that aim when he said "no."

"I am completely convinced that Kosovo should be independent, I support that cause with no reservations," Balic told the Associated Press by telephone. "But I won't support the plan because it damages it."

He said he was surprised "how naive" his colleagues were, and told media after the vote that the ethnic Albanian deputies were pressured "from outside" to approve the plan.

"Ahtisaari's plan is only a proposal, it's not the end of the process," said Balic, warning that if the plan fails to be approved by the U.N. Security Council - which has the final say over the province's fate - violent riots will break out in Kosovo.

Ahtisaari's proposal calls for the province's independence from Serbia, initially supervised by the international community, and offers broad rights to the province's Serb minority to run their daily affairs and preserve their identity and culture.

Ethnic Albanian leaders, who demand independence, have supported the plan and Serbia - which insists the province remains within its borders - has vehemently rejected it.

Kosovo's Serbs, who do not vote in parliament because they have boycotted the province's public institutions, have warned of secession of the Serb-dominated north if Kosovo gains independence.

Balic, one of the representatives of the some 35,000 members of the Bosniak community estimated to live in Kosovo, said the plan gives "exclusive rights to the Serbs" who account for 5 percent of the province's 2 million and makes them equals to Kosovo's Albanian majority, which make up 90 percent of the population.

"The rights of other communities are ignored and that's unacceptable," he said.

"It's not the first time that he has done things that are surprising and weird, but this does not surprise or astonish anyone anymore," said Hysa, who was part of the negotiations with Serbian officials.

The plan has been protested by several thousands ethnic Albanian hard-liners, who say it offers too many concessions to the Serb minority living in Kosovo and risks dividing the province along ethnic lines. Many others have grudgingly accepted it.

But, Sadik Idriz, Kosovo's health minister and a representative of a larger Bosniak Muslim party in Kosovo's assembly, said Ahtisaari's proposal - despite some shortcomings - was acceptable.

Balic "is a conflictual man who tries to get attention to show that he's alive," Idriz said. "100 Albanian lawmakers vote for it and he votes against?"