The bird flu virus racing through Asia killed a teenager in hardest-hit Indonesia and a young girl from Cambodia, both after being admitted to hospitals in serious condition, health officials said Friday. 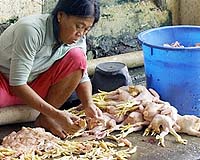 The 15-year-old girl from Indonesia's bustling capital Jakarta died late Thursday after experiencing multi-organ failure, said Sardikin Giriputro, a doctor at the facility. "By the time she arrived, it was too late," he said.

The Cambodian child was initially suffering from high fever and diarrhea before being transferred from an eastern province to Phnom Penh, but she quickly got worse, the World Health Organization and health ministry officials said.

The 13-year-old developed a cough and was struggling to breathe before dying Thursday.

Bird flu has killed at least 170 people since it began ravaging Asian poultry stocks in 2003, according to the WHO. It remains hard for people to catch, and most human cases have been linked to contact with sick birds - including the two latest deaths.

But experts fear it could mutate into a form that spreads easily among people, potentially sparking a pandemic that could kill millions.

Indonesia, the hardest hit country with 73 human deaths, is seen as a potential hotspot for that to happen because of its high density of poultry and people.

Worried that poor countries will not be able to afford much-needed vaccines if that happens, the government stopped sending samples of its bird flu virus to WHO-affiliated laboratories several months ago.

It said it wanted a guarantee that the strain would not be made freely available to commercial vaccine makers without Indonesia's consent. Though the WHO agreed with the demand last month, no samples have yet been sent.

Cambodia's death was that country's sixth - and the first in a year.

Some chickens in the girl's village died before she became ill and she may have been exposed to the virus after preparing and eating tainted chickens, according to WHO and the Health Ministry.

Officials have been sent to the area to see if any other villagers were displaying flu-like symptoms or had come in contact with sick or dead poultry, they said in their statement.