President Viktor Yushchenko threatened his rival with criminal charges if he refuses to prepare for early parliamentary elections next month. 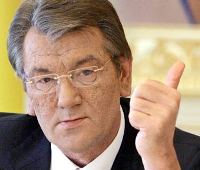 Prime Minister Viktor Yanukovych remained defiant, however, vowing to first wait for a ruling from the Constitutional Court on the legality of the dissolution order. He also said called for the involvement of a European mediator to defuse the crisis, the worst in the country since the 2004 Orange Revolution.

The court said Thursday it would issue a decision within one month of opening its hearings, but did not announce when they would start.

Yushchenko has been reluctant to leave the matter in the hands of the 18-judge court, which has a reputation for being slow-moving and susceptible to political influence. He's been pressing Yanukovych to make a political decision and accept the elections.

"I stress again that this order is binding," Yushchenko said as he opened a session of the presidential Security and Defense Council. "Failing to fulfill it will result in criminal charges."

The battle for power between the president and the premier began Monday when Yushchenko signed an order to dissolve parliament and call early elections. Yanukovych and his majority coalition called it illegal and refused to abide by it. Since then, both men have accused each other of violating the law, and warned of unspecified consequences.

On Thursday, Yanukovych's coalition partners, the Communists, called for a nationwide strike next week and thousands of Yanukovych's supporters rallied outside the Central Election Commission to demand it halt preparations for the May 27 election.

The security council gave Yanukovych _ who controls the country's budget _ a Saturday deadline to release funds to pay for the election, a deadline he said was impossible. He also said Yushchenko should instead "take his order off the table" and return to negotiations and appealed for outside mediation.

Ukraine "needs to take advantage of European political experience which we lack here," he said, telling journalists that he'd asked Austrian Chancellor Alfred Gusenbauer to mediate after talking with him by telephone Thursday.

There was no immediate response from Gusenbauer.

Ukraine's Foreign Minister Arseniy Yatsenyuk, however, said that foreign mediation was not necessary.

The dispute between the pro-Western Yushchenko and the Russian-leaning Yanukovych echoes their struggle in the bitter presidential race and subsequent Orange Revolution protests in 2004 _ only with the roles seemingly reversed.

During the Orange Revolution, Yushchenko's supporters erected a tent city in Kiev's Independence Square and remained there for weeks in freezing temperatures to protest Yanukovych's fraud-tainted victory. Yushchenko appealed Yanukovych's victory to the Supreme Court, which threw the win out and ordered a revote that Yushchenko won.

Yanukovych returned as premier in August after his party won the most votes in the parliamentary election and put together a majority coalition. Under new Constitutional changes, the parliamentary majority became the authority who could nominate the premier, forcing Yushchenko into an awkward power-sharing arrangement.

The two leaders began bickering almost immediately over the division of power and over foreign policy direction. But their dispute reached a breaking point last month after 11 lawmakers from pro-presidential factions defected to Yanukovych's ruling coalition. That raised the likelihood that the premier would soon have a 300-seat super-majority that could override presidential vetoes and make changes to the Constitution.

Yanukovych supporters have set up a tent camp near parliament, and have scattered tents on Independence Square. Most appeared empty on a recent night, though, with about a dozen men milling around, guarding them. Yanukovych's allies have also led supporters on daytime rallies around the capital; Some supporters say they were paid to be there.

Vadym Glushchenko said he came to protest outside the Central Election Commission because "we do not want to go through new elections and suffer from it."

The United States and Russia have appealed for calm.