At the meeting in Jordan Iraqi Sunni scholars formed a body that would have the sole authority to issue fatwas, or religious edicts, while also urging an end to the U.S. occupation of Iraq through "legal means." 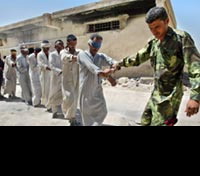 The two-day meeting of the Sunni Religious Affairs Council, or Waqf - the fifth in four years - was held in Jordan because of safety concerns. It was attended by about 150 scholars.

The council was formed after the U.S.-led war, when Iraq's ministry for religious affairs was dissolved and replaced by separate councils, or Waqfs, for the Shiite, the Sunni and other religions.

On Thursday, the gathering formed a body that would be the sole authority among Iraqi Sunnis in issuing fatwas, the scholars said in a statement. The move was an attempt to pre-empt fatwas issued by those without the required scholarly qualifications, a growing practice in the Middle East.

The scholars' statement said the new Convention Council for Iraq's Ulama will fill the gap in the field of Fiqh and Shari'a, or Muslim legislation and ideology. An Iraqi Fiqh Academy, which would answer to the council, would be authorized to issue fatwas.

"It is necessary that fatwas be issued by a group of those who have knowledge, awareness and piety, while implementing the principle of Shura or Islamic consultation in the issuance of Fatwas," the statement said.

The scholars also urged for an end to the U.S.-led occupation in Iraq through "taking all the legal ways and means to rid Iraq of those who occupy it" and for the setting of a "timetable for their withdrawal."

They also demanded that those persons detained or kidnapped in Iraq be released as a sign of good intentions for reconciliation between Sunnis and the Shiites.

"The conference condemned the inhumane practices, such as kidnapping, assassination, arrest, bombing and assault of prayer houses," the statement added but did not point out a particular side or group responsible for the atrocities.

At Wednesday's opening of the conference, Sheik Abdul-Malik al-Saadi, a prominent member of the Sunni Waqf, called for ending the sectarian killing in the war torn country and urged "our brothers the Shiite scholars and politicians to advise those in the death squads against killing Sunnis."

"By the same token, I also urge the other side (Sunnis) to stop the haphazard killing of the Shiites," he had said.

Sheik Ahmed Abdul-Ghafoor al-Sameraie, head of the Sunni Waqf, called for national reconciliation in Iraq. He said all Iraqis must work to promote moderation and counter the militant takfiri ideology - an extremist doctrine that regards non-militant Muslims as infidels.

But at least one of the scholars called for supporting the insurgency. Numan Abdul-Razzak al-Sameraie, also a member of the Sunni Waqf, said that "fighting the occupier is a legitimate action."