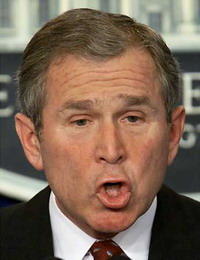 Bush opposed Pelosi's visit to Syria. Other than labeling the British sailors "hostages," he stayed on the sidelines in the standoff between Iran and Britain. And Abdullah's surge of diplomatic activity - declaring the U.S. presence in Iraq illegal and reviving a Palestinian-Israel peace overture - signaled that Saudi Arabia would no longer take a back seat to its longtime ally the United States.

In a news conference this week, Bush disputed that he was becoming increasingly isolated - even in his own party - and portrayed himself as a strong leader determined to keep Iraq from becoming a "cauldron of chaos."

But the world keeps turning. As Bush remains locked in a standoff with the Democratic-led Congress over Iraq spending and resists direct talks with Syria, Iran and the Palestinian Hamas party, others are stepping up to the plate.

Being the leader of the world's remaining superpower sometimes has its limits.

Judith Kipper, a Middle East expert at the Council on Foreign Relations, said the president should take more seriously the recommendation of the bipartisan Iraq Study Group to negotiate with adversaries.

"Clearly, the leaders of Congress have every right in the world on their fact-finding trips to go and talk to anybody they want to," Kipper said. "Congress has a role in foreign policy. It provides the money and the support of the American people, as their representatives."

The White House is maintaining its criticism of Pelosi's trip. Her visit to Syria just rewards Assad for his bad behavior, Vice President Dick Cheney told ABC News on Wednesday.

Gordon Johndroe, spokesman for the White House National Security Council, said the administration had been engaging Syria in international forums such as last month's conference in Baghdad that brought together Syrian, Iranian and U.S. delegates. "And it's unfortunate that she took this unilateral trip that we only see as counterproductive," Johndroe said.

Speaking with reporters in Damascus, Pelosi said she pressed Assad over his country's support for militant groups Hezbollah and Hamas, which the U.S. considers terrorists; discussed foreign fighters who slip into Iraq from Syria, and relayed a message that Israel was ready for peace talks with Syria. She expressed hope that "the road to Damascus is a road to peace."

Michael O'Hanlon, a foreign policy analyst at the Brookings Institution said Pelosi's visit clearly was not helpful from the administration's vantage point. "But there's only marginal harm that can come from this, and probably also only marginal benefit."

O'Hanlon, who was an adviser to the Iraq Study Group, said Pelosi "gets a lot of cover" from the emphasis put on reaching out to Syria and Iran by the group's co-chairmen, former Secretary of State James A. Baker III and former Rep. Lee Hamilton.

As secretary of state for Bush's father, Baker traveled to Damascus to meet with Assad's father and predecessor, Hafez Assad. The elder Bush met with Hafez Assad in Geneva, finding him "engaging, but it was a tough discussion."

The White House insisted it was not just singling out Pelosi and her Democratic delegation, and opposes trips to Damascus by Republican lawmakers as well. Three Republican congressmen who met with Syria's leaders last weekend defended their visits.

"I don't care what the administration says on this. You gotta do what you think is in the best interest of your country," said Rep. Frank Wolf. "I want us to be successful in Iraq. I want us to clamp down on Hezbollah."

In some ways, Bush's remaining on the sidelines might have kept tensions at bay in the 13-day standoff between Iran and Britain. Ahmadinejad's surprise move on Wednesday to free the 15 sailors and marines in what he called an Easter gift to the British people eased tensions that had been increasing steadily.

And the denunciation of the U.S. presence in Iraq by Abdullah last month, his peace overture to Israel and support for a governing Palestinian coalition that includes Hamas helped distance his Saudi kingdom from the United States, a relationship scorned by many of his neighbors.

Pelosi on Thursday met with Abdullah in Riyadh, the Saudi capital. She later told reporters she did not discuss Abdullah's criticism of U.S. Iraq policy but praised the king for his Mideast peace initiative and efforts to quell conflicts in Somalia and Darfur. She also said she raised the issue of the lack of female politicians in Saudi Arabia in her talks with officials there.