The U.S. acknowledges sponsorship of public events in Zimbabwe aimes to undermine the President

The U.S. State Department acknowledged that sponsorship of public events in Zimbabwe had an aim to undermine the government of President Robert Mugabe. 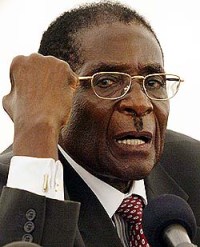 The U.S. acknowledges sponsorship of public events in Zimbabwe aimes to undermine the President

In it annual report on supporting democracy worldwide, the department said its strategy for Zimbabwe also included steps to "support persons who criticized the government."

Although nominally a republic, the government under Mugabe is "now authoritarian, the report said. Many humanitarian groups who no longer operate in Zimbabwe agree that "fundamental political and economic changes" are a prerequisite to reengagement in Zimbabwe, it added.

The report said U.S. officials have made known to Zimbabwean officials the importance of lifting political restrictions and curbing human rights abuses.

"To encourage greater public debate on restoring good governance in the country, the United States sponsored public events that presented economic and social analyses discrediting the government's excuses for its failed policies," the study said.

In a briefing for reporters, Assistant Secretary of State Barry Lowenkren said the U.S. goal in Zimbabwe is not necessarily regime change but rather to create a more level political playing field.