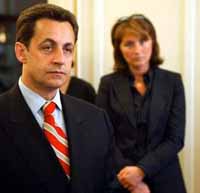 The Paris prosecutor's office called for the investigation based on anonymous e-mail messages sent to the France-5 television station and an official with the Socialist Party, whose candidate Segolene Royal is Sarkozy's chief rival, a judicial official said.

Sarkozy, leading polls before April 22 elections, was to travel to Lyon later Thursday for a campaign rally.

Agents from the SAT anti-terrorism agency were trying to identify the computers that sent the e-mails, the official said. The official spoke on condition of anonymity because under French law information about investigations is secret.

Officials at Sarkozy's campaign headquarters would not comment on the threats or whether security measures were being tightened for the Lyon visit. No other details were immediately available.