Argentina's main teachers' union called for a one-day national strike next week after protesting colleagues clashed with riot police in parts of the country Wednesday. 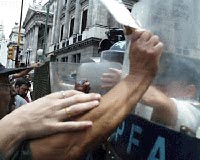 Video broadcast on Todo Noticias showed at least two people injured and bleeding after teachers demanding higher pay tried to block a highway leading to a tourist area in the southwestern province of Neuquen ahead of the Easter holiday.

Demonstrators threw rocks and punched police, who responded with tear gas and water cannons during the protest about 720 miles (1,200 kilometers) southwest of Buenos Aires, footage showed.

One of the injured underwent two surgeries after being injured by an exploding tear gas cannister and was in critical condition, said a local hospital director, Jose Maria Tapa.

In the northern province of Salta, police fired rubber bullets at teachers who tried to block local lawmakers from leaving the legislature after they voted to renegotiate salaries only after the educators end a six-week work stoppage in the region. Teachers in several other provinces also are demanding higher wages.

Argentine teachers who earn a base salary starting at US$333 (EUR250) a month complain that two years of double-digit inflation have eroded the purchasing power of their paychecks and call government offers to raise wages by 10 percent insufficient.