The editor-in-chief of Playboy Indonesia was found innocent Thursday of violating indecency laws in the world's most populous Muslim nation and will not face time behind bars, judges ruled Thursday. 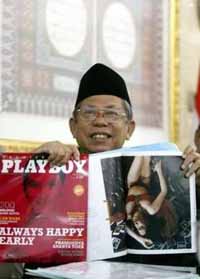 Erwin Arnada had faced a maximum punishment of more than 2 1/2 years in prison in a case closely watched by Islamic hardliners, who have loudly protested since the toned-down version of the American magazine hit newsstands in Indonesia one year ago.

But Efran Basyuning, presiding judge of the South Jakarta District Court, said pictures of scantily dressed women, some in underwear with their breasts partially exposed, could not, under criminal laws, "be categorized as pornography."

Two water cannons were set up outside the courthouse ahead of Thursday's verdict, and more than 600 police officers were deployed in case demonstrations turned violent. But there was no immediate reaction from nearly a hundred hardliners gathered outside.

Indonesia is a secular country with more Muslims than any other in the world, some 190 million. While most practice a moderate form of the faith, fundamentalists, taking cues from the Middle East, have been pushing hard to impose strict Islamic law.

Pornographic films on video, though illegal, also are sold more or less openly at stores across the country and some magazines are more sexually graphic than Playboy.