Germany's foreign minister claims that Syria in working toward peace in the Middle East should remain on the agenda. 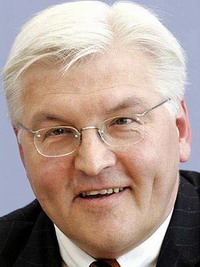 Asked whether his efforts to engage Syria had failed, Steinmeier replied: "no, the issue remains on the agenda out of necessity," according to an advance copy of an interview to appear Thursday in the daily Tagesspiegel.

"The latest high-level American visits to Damascus show this too," Steinmeier was quoted as saying. "We need all of Israel's neighbors for lasting security and peace."

When Steinmeier visited in December, he pressed Syria to use its influence to moderate the demands of the Hezbollah militant group, which fought a war with Israel last summer and has sought the resignation of Lebanon's Western-backed government.

Israel criticized that trip, but German Chancellor Angela Merkel defended it, saying that "unusual steps" are a part of the search for peace in the Middle East.

Syria's information minister and foreign minister said Wednesday that Damascus had played a key role in resolving the standoff over the 15 British sailors held by Iran.