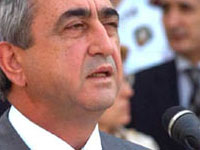 Sarkisian, 52, will serve as head of the Armenian government only until the May 12 parliamentary elections, which his Republican Party is widely expected to win.

Margarian, 55, who died of heart failure on March 25, had served as prime minister since the politically tense period that followed an October 1999 armed attack on parliament that killed eight politicians, including Prime Minister Vazgen Sarkisian, who is not related to the defense minister.

Under the Armenian political system, the prime minister has mostly executive powers and is a much less powerful figure than the president.