However, Stephane Dudoignon's situation cannot be compared to that of the 15 British marines arrested March 23 and who Tehran said Wednesday it would release, Foreign Minister Philippe Douste-Blazy said. 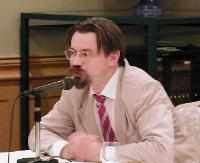 Dudoignon was arrested in the sensitive region of Sistan-Baluchestan, in southeastern Iran, on Jan. 30 after photographing a religious procession there, French Foreign Ministry spokesman Denis Simonneau said.

Iranian authorities immediately released Dudoignon but confiscated his personal items, including his passport, Simonneau said. Dudoignon  a historian specializing in Islam has not been charged with any crime, Simonneau said.

"We are in contact with Iranian authorities to do what we can so that he can leave as soon as possible," Douste-Blazy told reporters. He said, however, that the case "can in no way be compared to the capture of British marines or the Lherbier affair," a reference to Stephane Lherbier, arrested with a German, tried and jailed.

Dudoignon, who is married to an Iranian woman, is living with his wife's family in the capital, Tehran, the French Le Monde daily reported Wednesday. He is not authorized to leave the city.

Dudoignon's case was discussed during a meeting last week between the Iranian ambassador and French Foreign Ministry officials.

"We call on Iranian authorities to quickly find a solution to allow Mr. Dudoignon to leave Iranian territory," Simonneau said in an online briefing on Wednesday.

In November, 2005, Iranian officials arrested another Frenchman and a German, reportedly for taking photos of ships in the Persian Gulf. Stephane Lherbier and Donald Klein were convicted in January 2006 and sentenced to 18 months in prison. Lherbier, the Frenchman, was released in February, and Klein was freed last month.