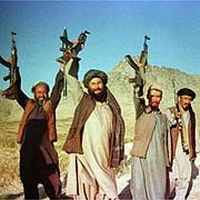 The French man and woman, who work with the aid group Terre d'Enfance, left their office in Nimroz province on Tuesday morning and were traveling with their cook, driver and bodyguard, provincial police chief Daud Askaryar said.

Askaryar said the French woman was wearing a burqa, and the man was dressed in a traditional Afghan shalwar kameez tunic and turban. Their colleagues in Nimroz last saw the two Tuesday morning and reported them missing Tuesday night when they had not heard from them, Askaryar said.

He said they left their office without telling their colleagues in Nimroz.

Terre d'Enfance is an organization that works on children's education projects in Afghanistan, and the group have been working in Nimroz for four years, said Ghulam Dastagir, the province's governor.

A purported Taliban spokesman, Qari Yousef Ahmadi, said that militants kidnapped the five in Nimroz province - a claim that could not be independently confirmed.

Ahmadi, who spoke by phone to an Associated Press reporter from an unknown location, named the kidnapped Afghans as Mohammad Rasoul, Zahir Shah and Abdullah. All five were in one vehicle when they were captured and are being held by militants in Nimroz, he said.

Taliban militants will conduct an investigation and the group's higher authorities will decide what to do with them, Ahmadi said.

Interior Ministry spokesman Zemeri Bashary confirmed that two French people, employed by a non-governmental organization that works with children, had gone missing between Nimroz and neighboring Farah province. He said they traveled without informing police.

"The Foreign Ministry and our embassy in Kabul are following this matter closely and are in contact with local authorities, as well as the French NGO," ministry spokesman Denis Simonneau wrote in an online briefing Wednesday.

The purported kidnapping comes one month after Italian reporter Daniel Mastrogiacomo of the Italian daily La Repubblica and two Afghan colleagues were kidnapped by the Taliban in Helmand province. Mastrogiacomo was released March 19 after the Afghan government released five Taliban prisoners, an exchange that Afghan lawmakers, analysts and international workers criticized.

Mastrogiacomo's translator, Ajmal Nashqbandi, is still being held. His driver was beheaded.