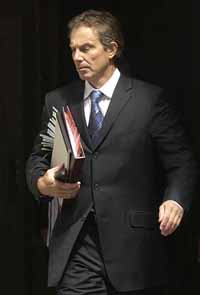 In a statement Tuesday, Blair's Downing Street office said "both sides share a desire for an early resolution of this issue through direct talks."

Hours after Foreign Secretary Margaret cautioned against expecting a swift resolution to the crisis, Downing Street struck an upbeat note, announcing there had been "further contacts" between the two countries, including with chief negotiator Ali Larijani.

"On the basis of these, the prime minister believes that both sides share a desire for an early resolution of this issue through direct talks," Blair's office said. "The prime minister remains committed to resolving this by diplomatic means. The UK has proposed direct bilateral discussions and awaits an Iranian response on when these can begin."

Blair said earlier Tuesday that the next 48 hours would be "fairly critical" to resolving the standoff over the British personnel, who have been held by Iran since March 23.

Earlier, Beckett told reporters that intense diplomatic efforts were continuing, but urged people "to be cautious in assuming that we are likely to see a swift resolution to this issue."

Beckett said Britain still had not been granted consular access to the eight captive sailors and seven marines, who were detained in disputed Persian Gulf waters.

Beckett stressed that Blair was not talking about military action.

"He is not talking or attempting to imply anything about military action. We are not seeking confrontation," she said. "We are seeking to resolve this through diplomatic channels."

New pictures of the sailors and marines were published Tuesday by the Iranian news agency Fars. The still images appeared to show members of the naval crew chatting, smiling and playing chess in casual tracksuits.

It was not immediately clear if publication of the stills, apparently taken from a video, was a breach of Tehran's earlier suggestion that no more footage of the sailors would be broadcast because of "positive changes" in Britain's negotiating stance. Britain's Foreign Office said it was not clear if the images were old.

"If they want to resolve this in a diplomatic way the door is open," Blair told Scotland's Real Radio, saying the "next 48 hours will be fairly critical."

Senior Iranian diplomat Ali Larijani's suggestion Monday of talks over territorial disputes in the Persian Gulf had offered the hope of an end to the crisis, the British premier acknowledged. But if negotiations to win the quick release of the 15 sailors and marines stalled, Britain would "take an increasingly tougher position," Blair said.

Larijani said Monday that Iran sought "to solve the problem through proper diplomatic channels" and proposed having a delegation determine whether British forces had strayed into Iranian territory in the Gulf. He did not say what sort of delegation he had in mind.

Larijani told Britain's Channel 4 news Monday through an interpreter that Iranian officials believed there was no need for any trial of the navy crew.

Beckett said Britain was still awaiting an official response to a note it sent to Iran, following an official letter sent by the Iranians calling for Britain to avoid such situations in the future.

But she said there was "a huge amount going on behind the scenes," saying Foreign Office minister Lord Triesman was meeting the Iranian ambassador Tuesday for the eighth time in 10 days.

The British personnel were captured by Iranian forces in the Persian Gulf on March 23 while patrolling for smugglers near the mouth of the Shatt al-Arab, a waterway that has long been a disputed dividing line between Iraq and Iran.

Tehran says the crew was in Iranian waters. Britain insists its troops were in Iraqi waters working under a U.N. mandate.