A rapist and a killer of 10 women and an unborn fetus, is tied by DNA evidence. 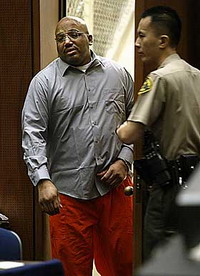 Chester D. Turner, 40, undergoes the death penalty if convicted of the murders, which spanned an 11-year period. He also is accused of the special circumstances of multiple murder and murder committed during rape.

Deputy District Attorney Bobby Grace said Turner was finally caught after he was arrested in 2002 for raping a woman in Los Angeles. His DNA was submitted to cold-case investigators and "like water from a faucet" each unsolved murder was linked to Turner, Grace told the jury.

The defense deferred its opening statement.

The women were killed between 1987 and 1998. In October 2004, Turner was charged with 11 counts of murder and the special-circumstance allegations. He has pleaded not guilty.

Police allege Turner accosted most of his victims in crime-plagued South Los Angeles and raped and strangled them before dumping their bodies.

His defense is expected to claim that he was a drug dealer whose customers were mainly prostitutes who often paid in trade. That, they say, would account for the DNA evidence.

The killing of one woman was recorded on a grainy security camera videotape, but Turner's lawyer has said the footage is so rough that it is impossible to identify the victim or assailant.

Turner is already serving an eight-year prison sentence in the 2002 rape case.

Before police identified Turner as a suspect, a mentally disabled janitor was wrongly convicted of three other slayings police believe are connected to Turner. Turner has not been charged with those murders.