The CEO of an electronics supply company pleaded not guilty of shipping U.S. computer technology to India for use in missiles and other weapon systems. 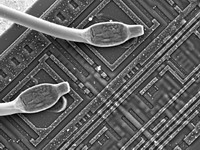 Sudarshan founded Cirrus Electronics, a company with offices in South Carolina, Singapore and India. Prosecutors say that between 2003 and 2006, Sudarshan bought equipment for three Indian government agencies: the Vikram Sarabhai Space Centre, which researches spacecraft and ballistic missiles, Bharat Dynamics Ltd., a key agency in the nation's guided missile program, and the Aeronautical Development Establishment, which is developing the Tejas combat jet. The U.S. Commerce Department restricts exports to these agencies.

Also facing charges in the case is Mythili Gopa, the company's international sales manager, who is due in court April 17. They are charged with export violations, international arms trafficking, being agents for a foreign government and conspiracy.