Minivans became regulars outside grocery stores, elementary schools and soccer fields in the 1980s, as they were the convenient and comfortable way to shuttle the kids around town. 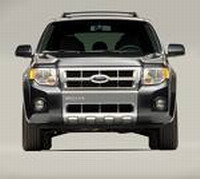 Now the U.S. auto industry is offering more and more alternatives to the traditional minivan, bringing the "mommy mobile" into the 21st century.

This week at the New York International Automobile Show, Ford Motor Co. is to debut its new "people mover" based on the Ford Fairlane concept, a boxy crossover that it first previewed in 2005. The vehicle, to be announced Wednesday, is expected to be called the Ford Flex.

The new Ford offering will be the latest entry to a broad number of crossover vehicles that have moved into some of the territory once claimed by minivans. Analysts say the vehicles offer the best of both worlds - the comfort and roominess of a minivan without the soccer-mom stigma or the hulking presence of a sport utility vehicle.

"We see consumers wanting a high driving position, wanting that command view of the road but not wanting to have a very harsh ride that you get with an SUV," said Rebecca Lindland, an auto analyst with Boston-based Global Insight.

In 2006, minivan sales in the U.S. fell below 1 million, compared to about 1.3 million sales in 2000, according to the Power Information Network, a division of J.D. Power and Associates. During the same span, car-based crossovers have risen from nearly 700,000 units in 2000 to more than 2.2 million vehicles last year.

General Motors Corp., Ford and Mazda Motor Corp. have left the minivan segment, focusing instead on crossovers. GM received a limited response from "sports vans" like the Chevrolet Uplander and Saturn Relay and Ford discontinued the Ford Freestar and Mercury Monterey last year after sluggish sales.

But no one is counting out the minivan yet.

"Over the last 23 years, we've kept on refining that recipe with surprisingly new features," said Chrysler Group chief executive Tom LaSorda during a January preview of the minivans.

Chrysler outlined an agreement with Sirius Satellite Radio Inc. last week to offer limited satellite TV service for its 2008 Dodge and Chrysler minivans and other models, bringing Nickelodeon, the Disney Channel and the Cartoon Network to the back seat.

Mark McCready, an auto analyst with CarsDirect.com, said other minivans such as the Honda Odyssey and the Toyota Sienna have been successful, along with Chrysler's offerings, because of the mix of reliability and new technology like DVD players and satellite radio.

"They've also not been afraid to innovate. The other company's products have all been a few years late and a few features short when they came out," McCready said. "The minivan market isn't big enough to support all of them."

Ford officials have declined to confirm the new vehicle's debut, but note the importance of the crossover segment. Ford has heavily marketed its new Edge crossover and pointed to the vehicle as a key factor in its recovery plan.

"Crossovers are where the market is headed," said Ford spokeswoman Marci Williamson.