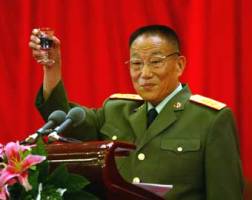 China will strengthen it’s military and other cooperation with Sudan although being criticized for supporting the African country, state media said.

China buys two-thirds of Sudan's oil and sells it weapons and military aircraft, but has been criticized for not using its influence to do more to stop the crisis in Sudan's Darfur region.

Xinhua News Agency reported late Monday that the countries had vowed "to boost military exchanges and cooperation in various sectors" during a visit by Sudan's Joint Chief of Staff Haj Ahmed El Gaili.

"Military relations between China and Sudan have developed smoothly," Chinese Defense Minister Cao Gangchuan was quoted as saying, adding "China is willing to further develop cooperation between the two militaries in every sphere."

Haj Ahmed El Gaili arrived in Beijing on Sunday for an eight-day visit. He is also scheduled to visit Nanjing and Shanghai.

A permanent member of the U.N. Security Council, China has come under increasing international pressure to use its influence with Khartoum to resolve the conflict, which erupted in 2003 when ethnic African rebels took up arms against the Arab-dominated central government, accusing it of neglect.

The Sudanese government is accused of unleashing militias known as the janjaweed, which are blamed for the bulk of the conflict's atrocities. More than 200,000 people have died and 2.5 million have fled their homes in the past four years.