Cigar smoke curled around Col. David Sutherland's face as he sat at his weekly campfire, just miles from the enemy, recalling the days when he paced the front of a classroom, lecturing Army officers on how to capture a town and not destroy it. 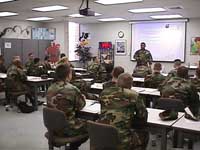 Now, those theories are getting a test in the brutal reality of Baqouba, rubbing up against a tough Sunni insurgency and al-Qaida in Iraq.

The 45-year-old Sutherland runs the U.S. military show in troubled Diyala province, a place where Iraqi police are beheaded in public parks.

His men tell stories of Iraqi children covering their ears when American vehicles rumble by because they know a roadside bomb is likely to explode.

Here - off the public radar screen - violence has spun viciously out of control in recent months, while all eyes were on Baghdad.

"Diyala is a little Iraq. We've got it all - tribal wars, sectarian wars and al-Qaida," Sutherland said recently at his office on a U.S. base in Baqouba.

The colonel, who underwent heart bypass surgery four years ago, asked to be sent to Iraq and was dispatched to Diyala in October.

He holds a master's degree from the School for Advanced Military Studies at Fort Leavenworth, Kansas, where he was teaching when the Iraq war began. But he plays the role of soldier's soldier - consciously not the academic sort - when his officers gather at the weekly bonfire.

Four of his soldiers died on one day last month and the bad news arrived at his office in waves - a knock on the door, a note handed in by an aide, heads bowed, knowing glances exchanged.

Aides say Sutherland walks to the mortuary affairs tent at his base and embraces the dead bodies of his men. "I hug all my fallen soldiers," Sutherland said.

The body of one soldier, a roadside bomb victim, needed DNA testing to be identified. Sutherland lifted the bagged remains and kissed them.

Sutherland has not always been as open about the province and its capital, the problems it faces with violent insurgents. Two months ago he was painting a far rosier picture than the evidence would support.

For example, on the same day insurgents blew up the Baqouba mayor's office and kidnapped the mayor, Sutherland was extolling progress he said was being made with regard to public services. He did not mention the attack on the mayor's office and had over the past weeks denied credible reports from citizens about the terrible security situation.

Success or failure in Sutherland's violent patch of Iraq could prove emblematic for the country as a whole.

"I didn't come here thinking it'd be easy. No one told me, `You're gonna get 9 hours of sleep a night and you're not gonna lose soldiers,"' he said. "But I believe this is the place for me."

Sutherland smells faintly of soap, cigars and the sandy dust that permeates everything here. Each night, he reviews the day with his feet propped on a wood stove outside his trailer.

At one of the sessions on a recent night, Sutherland bluntly explained his and the U.S. military's limitations.

"I can kill and kill all day long and it won't do anything other than create more terrorists," he said. "The Iraqi government in Baghdad needs to start providing for these people."

Behind his desk, a verse from Exodus stretches across the wall in large letters: "Let us deal wisely with them, or else they will multiply and in the event of war, they will also join themselves to those who hate us and fight against us."

Next to it hangs a map of Diyala with pushpins marking each U.S. death. Across the room there is a dart board and a group photo of military men in Hawaiian shirts, holding drinks with paper umbrella swizzle sticks.

At the center of Sutherland's battlespace is the mostly Sunni metropolis of Baqouba - a city that al-Qaida-linked militants are believed to want for their capital.

Direct attacks on coalition forces are up nearly 70 percent since last summer, according to military figures.

Earlier this month, a battle-tested Stryker battalion - about 700 soldiers riding in the Army's newest armored combat vehicles - was re-routed to Diyala from Baghdad to help.

The night they arrived, Sutherland outlined the next day's mission. Nearly 100 armored vehicles would roll down Baqouba's broad thoroughfares at sunrise, in a show of force.

But as the sun rose and the Muslim call-to-prayer fell silent, gunfire erupted across the city. The enemy knew they were coming. And two Stryker vehicles were lost that first day, reports AP.

"As a soldier, I want to be here on the ground," Sutherland said. "As an American, I want it to end."