U.S. Senate to set nonbinding date for pulling out troops from Iraq

The Senate plans to begin debate Monday on a war spending bill that would set a nonbinding goal of March 31, 2008, for the removal of combat troops. One of the Senate's Republican leaders said he believes his party has enough votes to block the measure. 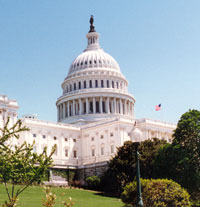 U.S. Senate to set nonbinding date for pulling out troops from Iraq

The House of Representatives narrowly passed a bill Friday that would pay for the wars in Iraq and Afghanistan this year but would require that combat troops come home from Iraq before September 2008 - or earlier if the Iraqi government did not meet certain requirements.

The Senate's No. 2 Republican leader, Trent Lott, on Sunday harshly criticized House Democrats for setting an "artificial date" for withdrawing troops from Iraq and said he believes Republicans have enough votes to prevent passage of a similar bill in the Senate.

"We need to put that kind of decision in the hands of our commanders who are there on the ground with the men and women," Lott said. "For Congress to impose an artificial date of any kind is totally irresponsible."

Meanwhile, another member of President George W. Bush's party said the president's go-it-alone approach on Iraq amounts to flouting Congress and the public, so angering lawmakers that some consider impeachment an option over his war policy.

Republican Sen. Chuck Hagel, a member of the Senate Foreign Relations Committee and a frequent critic of the war, stopped short of calling for Bush's impeachment. But he made clear Sunday that some lawmakers viewed that as an option should Bush choose to push ahead despite public sentiment against the war.

"Any president who says, I don't care, or I will not respond to what the people of this country are saying about Iraq or anything else, or I don't care what the Congress does, I am going to proceed - if a president really believes that, then there are - what I was pointing out, there are ways to deal with that," said Hagel, who is considering a run for president in the 2008 elections. Bush cannot run because of term limits.

In the April edition of Esquire magazine, Hagel described Bush as someone who does not believe he is accountable to anyone. "He's not accountable anymore, which isn't totally true. You can impeach him, and before this is over, you might see calls for his impeachment. I don't know. It depends on how this goes," Hagel told the magazine.

The White House had no immediate reaction Sunday to Hagel's comments.

In his weekly radio address Saturday, Bush accused Democrats of partisanship in the House vote and said it would cut the number of troops below a level that U.S. military commanders say they need. Vice President Dick Cheney also accused Democrats of undermining U.S. troops in Iraq and of sending a message to terrorists that America will retreat in the face of danger, the AP said.

Sen. Bill Nelson, a Democrat, said the Senate bill seeks to heed the recommendations of the bipartisan Iraq Study Group by setting a goal of withdrawing some troops while leaving others behind to train the Iraqi army for border patrol and other missions.

"That, combined with a very aggressive, diplomatic effort in the region is what we're going to need to have," he said.

Hagel spoke on ABC television's "This Week," Lott appeared on "Fox News Sunday," and Nelson was on CNN's "Late Edition."