Republican Gov. Arnold Schwarzenegger said Tuesday that the views of his conservative critics, including prominent radio host Rush Limbaugh, are irrelevant to his work in California. 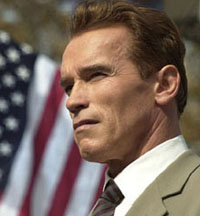 "All irrelevant. Rush Limbaugh is irrelevant. I am not his servant," Schwarzenegger said in an interview on NBC's "Today" show.

The governor's repudiation of Limbaugh comes as he is being accused of betraying his party's values. Many fellow Republicans have balked at Schwarzenegger's more moderate views on stem-cell research, global warming and universal health care.

Schwarzenegger said he was "the people's servant of California. What they call me - Democrat or Republican or in the center, this and that - that is not my bottom line."

Limbaugh responded on his radio program: "If he had the leadership skills to articulate conservative principles and win over the public as (former President Ronald) Reagan did, then he would have stayed conservative."

Schwarzenegger spokesman Aaron McLear said the governor's comments were not meant as a personal attack.

"The question was about the criticisms the governor gets from the right, and he thinks it's irrelevant to what he's trying to accomplish here in California," McLear said.

Schwarzenegger, who was born in Austria, has been a registered Republican since becoming a U.S. citizen in 1983, reports AP.

When first elected in 2003, Schwarzenegger offered a populist message. But then he made a conservative shift two years later when he tried to push through a series of measures that, among other things, would have diminished the influence of California's public employee unions. His approval ratings plummeted.