The Miss USA pageant gears up to name a new queen this week in a live televised competition that organizers say will spotlight how reigning titleholder Tara Conner nearly lost her crown and ended up in rehab. 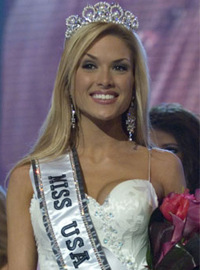 "Certainly, our reigning Miss USA is going to be on television and we're certainly not going to shy away from referring to what happened," executive producer Phil Gurin told The Associated Press on Monday. "Why shy away from what's part of our family? We embrace our family."

While not a centerpiece of the show, Conner will be "all over our telecast," Gurin said. The 56th annual pageant will be broadcast Friday on NBC from the Kodak Theatre with Nancy O'Dell of "Access Hollywood" as host.

Gurin said viewers will be able to see Conner and "make their own determinations by seeing how she presents herself, what she has to say about what happened this past year ... and that's something we've never been able to do before."

Conner endured intense scrutiny after reports she was frequenting New York bars. The Kentucky native held on to her crown after Donald Trump, who owns the Miss Universe and Miss USA contests in a partnership with NBC, decided to give her a second chance. She underwent a stint in rehab in Pennsylvania.

The behavior of other Miss USA contestants over the last few months also drew unwanted public scrutiny: Miss Nevada USA Katie Rees lost her title after racy pictures of her surfaced on the Internet, and Miss New Jersey USA Ashley Harder resigned when she got pregnant.

Gurin said he does not think the Conner flap has hurt the pageant's reputation.

"I think there's been more focus on the pageant, perhaps, than there might have been otherwise, but I don't think it's tarnished anything," he said.

If anything, Gurin conceded, the controversy may draw more viewers to the show.

"We don't want to capitalize from someone's misfortune," said Gurin, who marks his fifth year producing the pageant. "Anytime there's something that stirs up the pot, certainly more eyeballs are going to come to watch."

Asked about how the controversies might affect ratings or the pageant's image, NBC, which is owned by the General Electric Co., issued a statement saying the network is "delighted" with the pageant this year, reports AP.

Miss USA goes on to compete in the Miss Universe pageant.