China open to dialogue with Dalai Lama if he gives up independence efforts, premier says

China is willing to hold talks with the Dalai Lama as long as he gives up efforts for Tibetan independence, the Chinese premier said Friday. 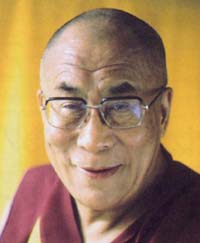 China open to dialogue with Dalai Lama if he gives up independence efforts, premier says

The mainland claims to have ruled Tibet for centuries, although many Tibetans say they were essentially an independent state for most of that time. Chinese communist troops occupied Tibet in 1951 and Beijing continues to rule the region with a heavy hand.

"As long as the Dalai Lama recognizes that Tibet is an inalienable part of Chinese territory ... and as long as the Dalai Lama gives up his efforts to split the county, we will be in a position and we are willing to have consultations and dialogue," Premier Wen Jiabao said at a press conference at China's legislative session, reports AP.

He added: "The door is always open."

China has accused the Dalai Lama of waging a clandestine campaign for formal independence, though he says he wants only greater autonomy in hopes of preserving Tibet's Buddhist culture.