British Prime Minister Tony Blair defended the war in Iraq as morally justified on Thursday and said the West should stop apologizing for its values. 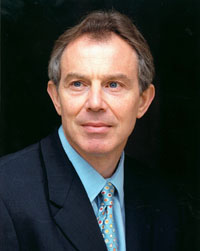 Blair said the U.S.-led war had brought democracy to the Iraqi people and he blamed the continuing violence in the country on a minority of extremists. The war was part of a global battle against terrorists, he said in an interview with Sky News marking the fourth anniversary of the March 2003 invasion.

"Until the Western world stops apologizing for its values, stops apologizing for the work its troops are doing in Iraq and Afghanistan, we're never going to defeat this," Blair said. "We'll end up in this situation where the worse these people are, that becomes a reason for our retreat, rather than our determination to see the job done."

Blair, who has said he will leave office by September, has seen his foreign policy legacy overshadowed by his role as U.S. President George W. Bush's chief ally over Iraq. He has been repeatedly asked whether he feels responsibility for the violence there.

Blair warned critics against giving into what he called terrorist propaganda.

"If we carry on apologizing for ourselves, leaving them the excuse that it's because of George Bush that they're doing these terrible things ... the less chance we have of protecting our security," he said, reports AP.

Blair announced plans last month to withdraw about 1,600 troops from southern Iraq over the coming months and said he hoped to reduce Britain's 7,100-strong contingent further by late summer.