Spanish parliament was expected on Thursday to pass a broad affirmative action bill aimed at getting more women in elected office and corporate boardrooms and more men heating baby bottles and changing diapers. 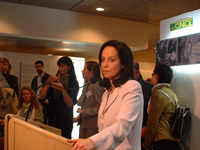 "Today is the first day of a different society," Socialist Prime Minister Jose Luis Rodriguez Zapatero said during debate before a vote on the bill.

The highlight of the so-called Law of Equality grants 15 days of paternity leave to new fathers, changing a little-used, current arrangement in which mothers of newborns can lend all or part of their 10 weeks' leave to the father. In 2013, the 15 days' leave will expand to a month.

The bill has already been passed in the Senate and was expected to win approval Thursday in the lower chamber of parliament, the Chamber of Deputies.

Another provision of the bill says women must make up at least 40 percent of the lists of candidates that parties field in elections. It will be applied the first time in May when Spain holds regional and municipal voting.

In the business world, where Spanish women are grossly underrepresented, companies that achieve more of a male-female balance among their executives and at lower levels will receive favorable treatment when they bid for government contracts.

Zapatero, who has made women's rights and gender equality a hallmark of a liberal-minded government that took power in 2004, said the law "will transform Spanish society forever and for the better."

Other measures in the new program aim to encourage the hiring of women in both the private sector and for government jobs. The unemployment rate among Spanish women is 14.4 percent, compared to 7.5 percent among men.

The government has complained that, although Spanish universities educate more women than men, women are scarcely represented at senior levels in the Spanish business world, reports AP.

It says, for instance, that among the 35 companies that make up the Spanish stock market's main index, only 2 percent of board members are women. Elsewhere in the European Union, the average is 8.5 percent, says the Paris-based European Professional Women's Network says.

In contrast, women were on nearly 15 percent of corporate boards at Fortune 500 companies in the U.S. in 2005, the New York-based nonprofit research group Catalyst reports.