Russian President Vladimir Putin will attend a signing ceremony Thursday for a deal to build a Russian oil pipeline to a port in northern Greece following strong pressure from Moscow to conclude decade-long negotiations. 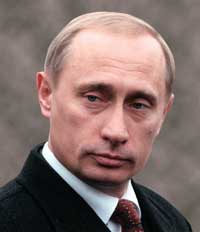 Spanning 280 kilometers (175 miles), the pipeline from Bulgaria's Black Sea port of Burgas to Alexandroupolis would boost networks in southeastern Europe transporting oil and gas from the Caspian Sea region to the European Union.

Putin, who had threatened to scrap the deal unless economic disputes were quickly resolved, will be joined Thursday by Prime Ministers Costas Karamanlis of Greece and Sergei Stanishev of Bulgaria.

Putin traveled to Greece from Italy, where he endorsed several bilateral energy agreements.

In Athens, 3,000 police have been deployed for Putin's visit, which coincides with plans for a mass student demonstration in the Greek capital Thursday.

Russia already provides Europe with a third of its oil and 40 percent of its natural gas.

"You get a strengthening of supply, but it can create higher dependency and other problems. You always have a trade-off ... to avoid this we need more diversification on the supply side, and to be less dependent on Russian energy," Kemfert said, speaking by telephone from Berlin.

"We need to look more to the global market ... but pipelines are not that flexible."

First conceived in 1993, the EUR 900 million ($1.2 billion) Burgas-Alexandroupolis pipeline will link the Black Sea to the Mediterranean, avoiding the Turkey's crowded Bosphorus Strait.

Russian firms will control a 51 percent stake in the venture, including infrastructure like pumping stations, storage facilities and loading docks, leaving EU-members Bulgaria and Greece with 24.5 percent apiece.

The Russian consortium is made up of state oil company OAO Rosneft, pipeline monopoly Transneft, and a subsidiary of state-controlled gas giant OAO Gazprom.

On Monday, Matthew Bryza, US Deputy Assistant Secretary of State for European and Eurasian affairs, visited Athens and expressed support for the oil pipeline.

But he added: "Where we are focusing most urgently now is diversification of gas supply ... away from its one primary supplier, Gazprom."

U.S. officials want Greece to prioritize gas from Azerbaijan in a natural gas network being built from central Asia to Greece through Turkey that is due to continue onto Italy after 2011, reports AP.

A meeting of officials from Azerbaijan planned in Athens Thursday was postponed on the eve of the Putin visit.