A South Korean publisher agreed Thursday to withdraw a best-selling children's book from stores after meeting with a prominent anti-Semitism watchdog group that accused the author of spreading messages echoing Nazi propaganda. 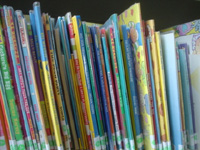 The series of comic books, titled "Meon Nara, Yiwoot Nara," or "Far Countries, Near Countries" and authored by visual arts professor Rhie Won-bok, purports to teach children about the world and has sold more than 10 million copies since the first volume was published in 1987.

One of three books on the U.S. initially published in 2004 contains a chapter claiming Jews were the driving force for the hatred that led to the Sept. 11 attacks, that they exert control over all U.S. media and also prevent Korean-Americans from succeeding in the United States.

Rabbi Abraham Cooper of the Los Angeles-based Simon Wiesenthal Center met with the author at his publishing company on Thursday in Seoul, confronting Rhie with copies from the group's archives of the early 20th century Nazi magazine Der Stuermer to show its similarity to caricatures in the South Korean books.

"I asked him straight out, 'Where did you get your stuff from, did you get it from Die Stuermer?"' Cooper told The Associated Press.

He also raised questions about drawings of African-Americans, prompting the publisher to pledge an extensive review of the entire series. In addition, Seoul-based Gimm-Young Publishers Inc. agreed to translate into Korean a book by the Wiesenthal Center that aims to reveal anti-Semitic mistruths.

The publisher also will send officials to the U.S. to meet with the Korean-American and Jewish communities, Cooper said. The company confirmed it would take the steps in response to the center's complaints.

However, Cooper said the author's responses were inadequate and that he did not expect him to play a role in resolving the issue, the AP reports.

"The net effect of what he's done here is a disaster and he just doesn't get it," Cooper said. "I hope he will someday, but in the meantime this book's got to go."

Rhie could not be immediately reached for comment. However, he had earlier maintained, despite the criticism, that his depiction of Jews in the book was accurate and insisted he was not anti-Semitic.