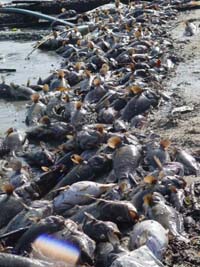 The dead fish, worth about 30 million baht (US$920,000; EUR 700,000), amount to the "biggest damage ever to the Chao Praya's fishing industry," said Charanthada Kannasuta, director-general of the Fisheries Department.

Most of Thailand's fishing industry is dependent on catches from the sea, but the Chao Praya serves as a major source of food and income for riverside communities and local markets across central Thailand. It runs for 370 kilometers (230 miles) through 10 provinces and the capital, Bangkok, to the Gulf of Thailand.

The provincial authorities on Monday declared two districts in Ang Thong and five districts in Ayutthaya "disaster zones," allowing them to use the emergency budgets of 50 million baht (US$1.5 million, EUR 1.1 million) for each province to tackle the problems.

The Health Ministry said it was taking samples from the water and from the dead fish and investigating possible causes of recent pollution.

Ang Thong Governor Wibul Sanguanphong said that a monosodium glutamate factory in the Pa Mok district of Ang Thong was among the suspected culprits, adding that fish farmers carrying dead fish held a protest rally outside the factory Tuesday.

However, the authorities are also investigating if a sunken boat carrying 650 tons of sugar could be a cause. The boat broke apart as it was being salvaged over the weekend in the area, possibly causing a leak of sugar into the water.

The Irrigation Department has increased the flow of water into the river from the Chao Praya dam, which appeared to be flushing out the pollution, department spokesman Boonsanong Suchartphong said, reports AP.

About 200 soldiers were sent to the area to help the fisheries department bury the dead fish.