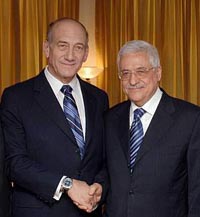 Olmert's aides have said the summit will focus on humanitarian issues, and that no significant political developments are expected. Olmert's spokeswoman, Miri Eisin, said the meeting's primary purpose was to "keep the line of communications open."

Eisin would not confirm that the meeting would take place Sunday, saying only that plans have yet to be finalized. The two sides previously announced plans to meet, but no date had been set.

Abbas and Olmert met Feb. 19 along with Secretary of State Condoleezza Rice. That summit was overshadowed by Abbas' agreement to form a national unity government with the Islamic militant group Hamas, and ended with no discernible results. Hamas, which calls for Israel's destruction, now heads the Palestinian government and is boycotted by the West.

The power sharing deal between Hamas and Abbas' more moderate Fatah movement falls short of international demands that the government recognize Israel, accept previous peace deals and renounce violence. The deal only says the government will "respect" past peace agreements.

Eisin said Friday that Olmert would bring up those international demands at the summit meeting, along with Israeli concerns about ongoing Palestinian rocket fire at Israel from the Gaza Strip.

Eisin also said Olmert planned to raise the issue of Palestinian tax money that Israel handed over to Abbas in January. The $100 million (euro76 million) in taxes and customs that Israel collected and held for the Palestinians were transferred on the condition that the money not reach the Hamas-led government, but instead be used for humanitarian needs and to fund security forces loyal to Abbas.

"There is a question: Has the money gone to where it needs to go?" Eisin said.

"This is Israeli piracy," he told reporters after Friday prayers, reports AP.

Erekat said only that the meeting would have an "open agenda" and that Olmert and Abbas would discuss "all of the issues."

The exact time and location of the meeting were not immediately publicized "for security reasons," Erekat said.

Neither Israeli nor Palestinian officials would confirm media reports that the two sides planned to discuss a prisoner swap and the extension of a cease-fire from Gaza to the West Bank.