With the Democratic Party deeply divided and holding only a narrow majority, House Speaker Nancy Pelosi faces considerable odds in trying to pass legislation that would bring troops home from Iraq before the 2008 presidential elections. 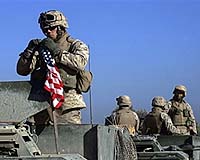 Pelosi has pitched a plan that would fund the war in Iraq but demand troops leave by Sept. 1, 2008. The elections are in November of that year.

The proposal immediately triggered a veto threat from the White House and rebukes from Republican leaders who predicted that President George W. Bush's fellow Republicans would unify in opposition.

But more troublesome for Pelosi was dissent within her ranks, with several conservative Democrats saying it may go too far and liberals who said it did not go far enough. Also, Pelosi's counterparts in the Senate also did not immediately step forward to support the House proposal, offering instead much softer legislation that identifies March 2008 as a goal for withdrawal.

"We are a caucus and we will come together and find our common ground. And I believe, in the end, we will be unified on it," Pelosi said Thursday, a day spent shuttling between meetings with members in a bid trying to bolster support for the legislation.

The upcoming vote - expected the week of March 19 - will be a major test of Pelosi's ability to lead a party elevated by voters who were angered by the four-year war. She will have to prove Democrats are living up to their promise to end the war, without running roughshod over moderates who oppose the war but do not believe in setting firm timelines for withdrawal.

Pelosi needs every vote she can get. Democrats hold 233 seats in the House, to 201 for the Republicans, with one vacancy, meaning they can afford only 15 defections and still be assured of passing their legislation.

"I believe the vote should be a vote of conscience," said Rep. Sheila Jackson Lee, a Democrat who is one of 71 members of a liberal coalition opposed to the war. And "my vote would be for a safe, fully funded withdrawal of troops" by the end of this year.

Jackson Lee and other members a 71-member liberal coalition are backing an alternative plan that would immediately limit the use of war funds for withdrawing troops, training Iraqis and other non-combat missions. It is doomed to failure, but Democratic leaders have been discussing whether to allow a vote on it if in return, liberals would then swing behind their bill.

"It's time Congress finally caught up to the people we represent - people who recognized long ago that the Bush Iraq policy was and is a train wreck," said Rep. Lynn Woolsey, a Democrat who is co-chair of the Progressive Caucus.

Nearly every member of the Blue Dog coalition, a group of moderate and conservative Democrats, met Thursday to hear out Pelosi and House Majority Leader Steny Hoyer, also a Democrat. According to attendees, several members said they oppose a provision in the bill that would prevent the president from attacking Iran. Another major issue for some was setting the hard deadline.

"In general, we need to give the commander-in-chief flexibility," said Rep. Jim Cooper, a Democrat. "My first choice would be a clean supplemental."

"There are an awful lot of members - not just Blue Dogs - concerned about a date certain" when troops would leave, said Rep. Jim Marshall, a Democrat.

A small group of Republicans indicated they might be on board. Rep. Walter Jones said "conceptually, I think this is on the right track," while Reps. Wayne Gilchrest and Chris Shays said they like the idea of holding the Iraqi government's feet to the fire, the AP reports.

Gilchrest said he might have been turned off by Pelosi's approach two years ago. "But we're talking about lives. This is life or death and Congress needs to be heard," he said.

"What we're seeing here is an artificial, precipitous withdrawal from Iraq based on, unfortunately, politics in Washington, not on conditions on the ground in Baghdad," Bartlett said.

In a press conference with reporters, Pelosi shrugged off the inevitable.

"Never confine your best work, your hopes, your dreams, the aspirations of the American people to what will be signed by George W. Bush, because that is too limiting a factor," she said.