Israeli and Palestinian leaders to hold summit on Sunday 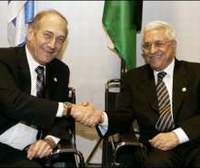 Israeli and Palestinian leaders to hold summit on Sunday

Israel's Channel 2 TV reported that the meeting between the two leaders will be held Sunday. The station did not cite the source of its information.

Palestinian negotiator Saeb Erekat said it was possible the meeting would take place on Sunday, but that some details still had to be worked out between the sides.

Olmert's spokeswoman, Miri Eisin, would not confirm a Sunday meeting, saying only that plans had yet to be finalized.

Olmert's aides have said the summit meeting will focus on humanitarian issues, and that no significant political developments are expected.

The two leaders met Feb. 19 along with Secretary of State Condoleezza Rice. That summit was overshadowed by Abbas' agreement to form a national unity government with the Islamic militant group Hamas, which now heads the Palestinian government and is boycotted by the West. It ended with no discernible results, the AP reports.

The power sharing deal between Hamas and Abbas' more moderate Fatah movement falls short of international demands that the government recognize Israel, accept previous peace deals and renounce violence. The deal only says the government will "respect" past peace agreements.

Eisin said Thursday that one of the issues Olmert plans to raise at the summit concerns Palestinian tax money that Israel handed over to Abbas in January. The $100 million (euro76 million) in taxes and customs that Israel collected and held for the Palestinians were transferred on the condition that the money not reach the Hamas-led government, but instead be used for humanitarian needs and to fund security forces loyal to Abbas.

The question of whether the money was used for those purposes is "an issue of concern" for Israel, Eisin said.

"There is a question: Has the money gone to where it needs to go?" she said.