Israeli police arrested a radical Islamic leader for incitement Wednesday as he led a protest in east Jerusalem, the latest run-in with authorities for the fiery cleric. 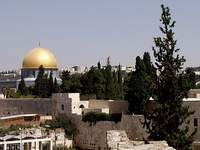 Three policemen were lightly injured, Rosenfeld said. The Arabic TV network Al-Jazeera said one of its cameramen was lightly injured by a stun grenade, the AP says.

Salah, an Israeli citizen, has spearheaded the fight against recent Israeli renovation work near the holy compound in Jerusalem's Old City known to Jews as the Temple Mount and to Muslims as the Noble Sanctuary.

Salah charges that Israeli is plotting to undermine the foundations of the Al Aqsa mosque and the Dome of the Rock, the Islamic shrines which stand at the site. Israel says the work is needed to repair a ramp damaged by a snowstorm and there is no threat to the Muslim holy sites.

Salah was arrested last month after scuffling with Israeli police guarding the site and barred from Jerusalem's Old City. He is already under investigation on incitement charges for calling for a new Palestinian uprising to stop the Israeli work.

In 2003, Israel jailed Salah for more than two years, saying his organization funneled money to the Palestinian militant group Hamas, responsible for dozens of deadly suicide bombings in Israel.