President George W. Bush says that when Fidel Castro dies, his communist government should as well. 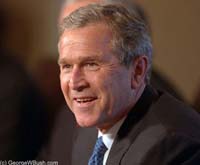 "How long he stays on earth, that's a decision that will be made by the Almighty," Bush told foreign journalists Tuesday ahead of a weeklong trip to Latin America.

"I don't know how long he's going to live. But nevertheless, I do believe that the system of government that he's imposed upon the people ought not live if that's what the people decide."

Castro is in failing health. For 47 years, he has had led a communist regime south of Florida's shores.

The Bush administration remains hopeful that his death will lead to grass-roots democratic reform, but so far, Castro's decision to transfer power to his younger brother, Raul, has gone seamlessly.

Bush said Cuba's future should not be based on the fact that "somebody is somebody's brother."

"We believe the Cuban people ought to make the decision for the future," Bush said.

The U.S. cut off diplomatic ties with Cuba in 1961, two years after Castro led an armed revolution that drove out U.S.-backed dictator Fulgencio Batista. Decades-old trade and travel embargoes made it illegal for American businesses to trade in an economy they once dominated, and few Americans have visited Cuba.

Bush leaves Thursday on a trip to Brazil, Uruguay, Colombia, Guatemala and Mexico. The trip is aimed at showing Bush has not overlooked Latin America. He plans to focus on common agendas of trade, energy and immigration.

The president said the trip will send a message to people in his own country, too. He said Americans must see the value of sending billions of their tax dollars elsewhere to help people in poverty get an education and health care, reports AP.

"In a country where there are isolationist tendencies where people sometimes say it's not our problem the president has got to be constantly reminding people that poverty in our neighborhood is our problem," he said.

Bush covered a series of other topics in an interview with reporters from Central America and South America.