Japan urged North Korea on Wednesday to comply with its international obligations and scrap its nuclear weapons, as a 35-nation meeting of the International Atomic Energy Organization focused on IAEA chief Mohamed ElBaradei's upcoming trip to Pyongyang. 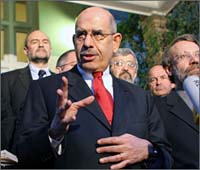 The call by Tokyo came amid news that an afternoon session of bilateral talks aimed at normalizing relations between North Korea and Japan had been abruptly canceled. The significance of the development was unclear, with Japanese officials saying they expected a Thursday session to be held as planned in Hanoi, Vietnam.

Since its start Monday, the IAEA's meeting in Vienna has been overshadowed by Iran's nuclear defiance in refusing to freeze uranium enrichment as demanded by the U.N. Security Council. The five permanent Council members are discussing possible new sanctions against Iran, including a travel ban, an expanded list of people and companies subject to an asset freeze, an arms embargo and trade restrictions but differences remain, council diplomats said.

The gathering is expected to approve a recommendation by the agency to partially or fully suspend 23 technical aid programs benefiting Iran, in line with existing Security Council sanctions, and will look at a report by ElBaradei confirming that Iran continues its enrichment activities.

Enrichment is a key issue because it can be used to make the fissile core of nuclear warheads, although Tehran insists it wants to enrich only to low levels used to generate power.

Before that, however, delegates were focusing on the other issue of nuclear concern, North Korea, reports AP.

ElBaradei plans to go to Pyongyang on March 13 as part of a six-nation agreement committing the North to dismantle its nuclear program, and ultimately scrap its weapons stockpile.