Fancy a ride with a woman cabbie at the wheel? If you are a man, forget it Mumbai's newest taxi service is for women only. 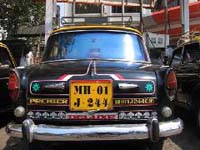 Sleek silver and white taxis sporting a blue and pink logo bearing the name "Forsche" a play on the name of the luxury German carmaker and the words "for she"will hit the roads for the first time Thursday to coincide with International Women's Day, said the new taxi company's founder, Revathi Roy.

The service will have special feminine touches like bigger mirrors, a makeup kit with a nail polish remover and a magazine rack. But it is no gimmick.

It addresses real concerns of female commuters. More women are traveling alone as they break with traditional roles and enter the workplace or even just to go out for the evening. Although Mumbai is considered safer than most cities on the subcontinent, where sexual harassment is rife, Indian women and visiting tourists often complain about being leered at by male cab drivers.

"Many women hate it when a taxi driver checks them out in the rearview mirror," said Roy, a 47-year-old former amateur rally driver.

The only males allowed to ride in Forsche cars will be children under age 12, so "with our service, women would never have to tolerate that. They would feel safe."

Roy says she is already negotiating six-month contracts with three hotels and four companies who would like their guests and female employees to use her dial-a-cab service. She also has families planning big weddings interested in the service to ferry female relatives, she says, although she didn't want to provide any names until the deals were finalized.

The concept of female only taxi services, which are also available in cities such as Dubai and Moscow, looks set to be popular among Mumbai's women.

"I go out clubbing very often with girls and we have to spend the night at someone's place if there is no transport back," said Vanita Vishwanath, 30, an advertising executive. "Even when working late in the office, I'd feel much safer traveling with a woman driver."

Nearly 200 hopefuls applied for positions as cab drivers and after three road tests, Roy whittled the list down to 18 women. Most of Roy's drivers are women 40 or older with grown children. The eldest is a 57-year-old grandmother.

"They speak English well and are educated," said Roy. "They have been driving their husbands and children around and now they are thrilled they will be paid to drive."

Roy declined to say how much "Forsche" rides would cost before the launch, saying only that it would be a premium service.

It seems there is a market for the service even if it costs more than the average taxi.

"If it's an expensive service, girls will chip in for the ride," said Rakhi Kukreja, 29, who works at an international investment bank. "You'll find parents of college kids, too, signing them up. They'll be relieved their girls are safe coming home."

Roy, who plans to start with 10 cabs and expand to 25, said she also wants to take the service to other Indian cities once it is established in India's financial capital, reports AP.

As for the cliche about women drivers, Roy says: "It's mainly men who are involved in road arguments and accidents. Women are safe drivers and my women will rock."