Relatives of those killed in a powerful Indonesian earthquake sobbed and threw rose petals on graves Wednesday and others began clearing rubble from their crumpled homes. At least 52 people were killed and hundreds injured in the temblor - the latest in a string of natural disasters to hit the nation. 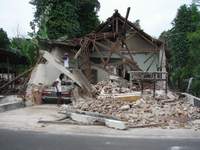 "My heart is crushed," said Yera Wesi, who lost her daughter Regia Putri. The 5-year-old ran out of her preschool when the ground began shaking violently, cracking nearby roads, shops and houses. She made it to the playground, but was smashed beyond recognition when a slab of concrete rained down from the building next door.

"She was my only daughter," Wesi said weakly, as her husband wept near a small mound of fresh dirt sprinkled with flowers.

The 6.3 magnitude quake that struck Sumatra island Tuesday left at least 52 dead, said Cabinet Secretary Sudi Silalahi, lowering the death toll by nearly 20. He said some victims had been counted twice. The temblor was felt as far away as neighboring Malaysia and Singapore, where some tall buildings were evacuated. Two hours later, a 6.1 aftershock rattled the region, the AP reports.

In Solok, a bustling town close to the epicenter, three members of one family were burned alive when their collapsed home burst into flames, said police spokesman Supriadi, who like many Indonesians uses only one name.

Another woman, Jaini, 71, died early Wednesday after being trapped inside her kitchen when the walls caved in. Her son-in-law dug her out of the rubble, but she refused to go to the hospital saying it was "no use," said her daughter, Kento.

Nursiam, Jaini's cousin, who was sitting with family members beside her dead relative before burial, said she had never felt such a powerful tremor. "This was the biggest ever," she said.

The damage was visible in patches of town and varied greatly, some houses were flattened with only tin rooms left sitting atop the ground, while others had only slight cracks in walls or porches. Many homes appeared to have escaped damage completely, but jittery residents were not taking any chances.

Many lounged on straw mats under trees and cooked under plastic canopies in yards. They spent Wednesday night outside wrapped in blankets, hovering beside lanterns and fires to escape the cool mountain air.

Indonesia, which straddles one of the world's most seismically violent zones, was hardest hit by the 2004 Asian tsunami that killed 160,000 people on Sumatra's northern tip. Since then, two other deadly quakes have occurred, as well as landslides, floods and volcanic eruptions.

Dozens of buildings were destroyed and hundreds others damaged in the latest quake, according to local police chief Lt. Col. Budi Sarwono. A three-story home was flattened, and wide cracks were left in roads.

Patients poured into hospitals, many with broken bones and cuts, but most were treated outside because of fears more quakes would follow.

A military hospital was deserted, and patients were treated across the street under tents in a soccer field. They were given oxygen and intravenous drips, and many had fresh bandages covering their heads.

"I tell them to keep their spirit alive," said Dr. Rocky Hendrawan, who was racing among the cots to check on patients. Officials said some 250 people were injured.

Indonesia, the world's largest archipelago, is prone to seismic upheaval because of its location on the so-called Pacific "Ring of Fire," an arc of volcanos and fault lines encircling the Pacific Basin.

In addition to the 2004 tsunami, an earthquake killed nearly 5,000 on Java island last year.