According to the survey conducted by the CVVM polling agency, 61 percent of Czechs opposed Washington's proposal to locate a radar station in a military area southwest of Prague. 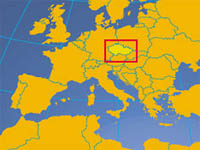 Only 25 percent of those polled supported the plan, and 14 percent were undecided, the state-sponsored agency said in a statement. A total of 1,080 people, aged 15 and older, were surveyed Feb 5-12. The margin of error was plus or minus 3 percentage points

The U.S. has made formal requests to place a radar base in the Czech Republic and 10 interceptor missiles in Poland as part of its plans for a missile defense shield that Washington says would protect against a potential threat from Iran or North Korea.

Russia is strongly opposed to the plan, and warned that Poland and the Czech Republic risked being targeted by Russian missiles if they agreed to host the U.S. bases, the AP says.

Most of the Czechs who opposed the plan argued that the base could endanger the country, and also worried it would worsen relations with Russia and other countries and create tension in international relations.

Prime Minister Mirek Topolanek's Civic Democratic Party, in coalition with the Christian Democrats and the Greens, supports the radar base, but the opposition Social Democrats and Communists are against, demanding a nationwide referendum on the issue.