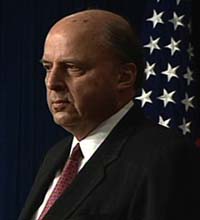 Negroponte's visit to Japan, South Korea and China comes in the wake of a breakthrough accord with regional powers to provide North Korea aid in exchange for the country's dismantling its nuclear weapons program.

International working groups from the six countries involved - Japan, China, South Korea, the United States, Russia and North Korea - must now begin the delicate task of trying to implement the February accord.

The agreement came just months after the communist state shocked the world with a nuclear test and marked the first concrete plan for disarmament in more than three years of negotiations, the AP says.

Japan has been a key partner with the United States in the nuclear talks with North Korea and is also a top ally in U.S.-led war on terror, even sending troops to Iraq.

Ties with China are also seen as being a top focus of Negroponte's trip.

China is a fellow permanent member of the U.N. Security Council, a major trading partner and an important player on such diplomatic problems as North Korea, Iran and Sudan.

Yet the Bush administration has become increasingly bothered by China's secrecy on its defense spending levels and the goals of what officials call its "rapid military modernization."

Negroponte, 67, began his career in Asia more than 40 years ago and has worked on regional issues periodically since then, including a stint as ambassador to the Philippines. He served as director of national intelligence for the past two years, as was U.S. ambassador to Iraq from 2004-2005.