Prodi to address Italy's Senate before confidence vote on his government

Italian Premier Romano Prodi prepared to address the Senate on Tuesday before a confidence vote in the upper house that will decide whether his center-left government survives. 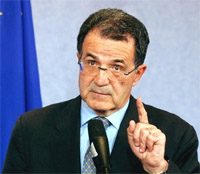 Prodi to address Italy's Senate before confidence vote on his government

Prodi's speech at the Senate where he has a minimal majority was expected to focus on Italy's military mission in Afghanistan, measures to increase competition in the country's economy, and family policies.

The Senate vote was scheduled for Wednesday a week after an upper house defeat on Afghanistan and other foreign policy issues led Prodi to resign. Prodi's far leftist coalition allies object to the government's plan to keep Italian troops in Afghanistan, and some of them did not support the premier in that vote.

After the resignation, Italy's president held talks with all party leaders and received assurances that Prodi had enough parliamentary backing to continue. On Saturday the president asked Prodi to stay on and put his government to a new vote of confidence in parliament.

If the government loses the confidence vote it will have to resign, opening a political crisis that might lead to the formation of a broad-coalition government or early elections.

With only a one-seat majority in the Senate, center-left leaders have tried to broaden the coalition to some moderate senators. At least one centrist Marco Follini, a former deputy premier who has since left the conservative coalition led by Silvio Berlusconi has said he will back Prodi.

An independent senator elected by Italians living abroad also said he would vote in favor of the government, after holding last-minute talks with Prodi on Tuesday.

The government can also count on support from some of seven honorary senators appointed for life, reports AP.

Should Prodi survive the Senate vote, on Friday he will submit his government to the judgment of the lower house, where he has comfortable majority.