With Fidel Castro unlikely to show and no celebrities due to drop in, Cuba's annual cigar festival will have little to distract visitors from the event's true stars: the island's premium, hand-rolled stogies. 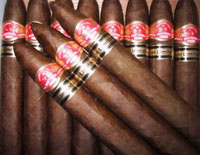 No Hollywood personalities have said they will attend the 9th Habanos Festival and acting President Raul Castro, who does not care for cigars, is not expected to turn up, either.

His older brother Fidel - once one of the world's most famous cigar aficionados but who gave up the habit several years ago - may not even autograph a collection of choice humidors auctioned during the event as he has in the past. The 80-year-old is recovering from intestinal surgery that forced him to temporarily hand over power to Raul in July.

But to the more than 1,000 aficionados from Spain, Canada, Russia and 40-plus other countries descending on the island, all that matters are the cigars, organizers say.

"There's not enough space to accommodate all those who were interested," said Manuel Garcia, commercial vice president of Habanos SA, Cuba's cigar marketing firm. "But specific celebrities, we don't have any."

Last year, British actor Joseph Fiennes of "Shakespeare in Love" fame attended, and Oscar-winner Jeremy Irons traveled to Havana for the festival in 2005.

At a news conference helping to kickoff the five-day festival Monday, Garcia said Raul Castro could make a surprise appearance, but "because of his personality, he's a man who doesn't appear much at these kinds of activities and also he doesn't smoke."

In some past years, Fidel Castro has attended the festival and he has always signed a small number of finely crafted humidors auctioned off for charity during the proceedings.

"He's recovering very well and we think it will be possible they are signed," Garcia said of five humidors on the auction block this year. "But up to now, we've not had confirmation."

This year's festival will launch a new line of cigars for the island's signature Cohiba brand known as Maduro 5, or Mature 5, which are finished with a wrapper leaf that has been aged five years. Wrapper leaves represent the final stage of cigar-making and are essential to how well a cigar burns.

The Maduro 5 line is scheduled for limited production, but officials would not say how many they will produce or how much each will cost, citing competitive concerns.

Cuba sold US$370 million (EUR 280 million) worth of cigars in 2006, which Habanos said was an 8 percent increase over the previous year. Javier Terres, Habanos' vice president for development, said that for strategic reasons the company couldn't divulge how many total cigars it sold last year, though in 2005 it said it sold 160 million.

Terres said the top markets for Cuban cigars are Spain, France and Germany, as well as Cuba. Because of Washington's four-decades-old trade embargo against the communist island, the cigars are not legally sold in the United States.

Like fine wine, the taste of top tobacco depends much on the soil and climate in which it is grown. Sun-drenched plantations outside Havana and in the neighboring western province of Pinar Del Rio have made Cuban cigars famous for centuries, and most cigars produced here are hand-rolled and intended for the premium market.

Despite the U.S. embargo, Terres said Cubans still account for as much as 35 percent of cigars sold worldwide. He said American smokers consume up to 220 million top-end cigars a year - a market officials here would love to crack.

"It's easily the principal market for premium tobacco in the world," Garcia said. "We are sure that if that market were opened to our products we would have great sales."

Officials acknowledged that some Cuban cigars are sold illegally every year in the United States, but said they could not estimate how many.

Both Garcia and Terres expressed concern about counterfeiters who try to pass off low-quality cigars, often produced in other countries, as Cubans in the United States and elsewhere, the AP reports.

Garcia said veteran smokers of Cuban cigars can spot a fake even before lighting up - but that novices are often not so lucky.

"The new smoker is the one in danger," he said. "If you've never smoked before ... and they give you a Cohiba, you will not have the necessary skills to compare what is a Cohiba and what is not."