A South Korean delegation departed Tuesday for high-level talks with North Korea after a seven-month hiatus, where South Korea's chief delegate said he would focus on seeking ways to quickly implement the North's pledge to dismantle its nuclear weapons program. 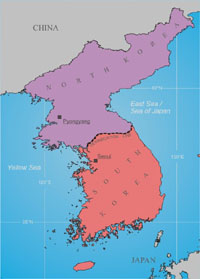 The resumed Cabinet-level meetings - the highest channel of dialogue between the Koreas - are the first concrete sign of eased tensions on the divided peninsula since Pyongyang's Feb. 13 agreement at international arms talks to shut down its main nuclear reactor within 60 days.

The high-level talks were last held in July, when the South refused to continue aid to the North after it test-fired a series of missiles. The countries' relations further soured after the North tested a nuclear weapon in October.

The South's Unification Ministry said its delegation departed Tuesday afternoon for the North Korean capital Pyongyang, where they were to have an official dinner with the North's officials before the formal start of talks Wednesday.

The two sides will discuss "most importantly, how they could cooperate in quickly implementing the Feb. 13 agreements," South Korea's Unification Minister Lee Jae-joung said Tuesday before his departure for the talks that run through Friday.

The Feb. 13 agreement calls for a separate forum on bringing peace to the Korean peninsula, which has remained technically in a state of war since the 1953 cease-fire that ended the Korean War.

"We will try to restore the framework of South-North dialogue and discuss various issues needed for establishing peace on the Korean peninsula through dialogue," Lee said.

This week's talks are also expected to discuss restoring South Korea's humanitarian aid of rice and fertilizer to the North, and resuming reunions of families split by the border. The reunions have been on hold since aid was suspended last year.

"The humanitarian issues are vital to South-North relations," Lee said.

Local media have reported that the two sides may talk about holding an inter-Korean summit, but President Roh Moo-hyun on Tuesday dismissed the idea as premature, the AP says.

"It's not the right time," Roh told a news conference of Internet-based news media, stressing that resolving the North Korean nuclear issue should precede a summit.

The first and only summit between the two Koreas was held in 2000 between then-South Korean President Kim Dae-jung and North Korean leader Kim Jong Il in Pyongyang. The North's Kim promised to pay a return visit to the South for a second summit, but has not honored that pledge.

Another key issue in this week's meetings, the 20th such Cabinet-level talks, will be whether the North allows a test run of trains on rebuilt tracks through the heavily armed frontier dividing the peninsula. A planned test run was put off last year because the North Korean military said proper security arrangements had not been made.