Al-Qaida suspects on trial for Istanbul bombings give final statements

Suspected al-Qaida militants accused in the 2003 Istanbul bombings that killed 58 people gave final statements in court Friday, with a key suspect calling on supporters to keep up the fight. 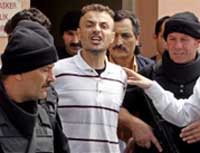 Al-Qaida suspects on trial for Istanbul bombings give final statements

Nine of the 73 suspects including Syrian Loa'i Mohammad Haj Bakr al-Saqa, the alleged mastermind of the suicide bombings appeared in the Istanbul court.

The attacks on Nov. 15 and Nov. 20, 2003, targeted two synagogues, the British consulate and a London-based bank.

Al-Saqa made a brief statement Friday, calling on "holy warriors" to keep fighting.

"Victory is very near!" he said in Turkish.

Defendant Seyit Ertul again denied any involvement in the Istanbul attacks, while Harun Ilhan, who has taken responsibility for the bombings, criticized Turkey's secular system and expressed hope for the establishment of an Islamic state.

"We know that one day this regime will fall and an Islamic regime will be established," he said. Turkey's government has Islamic roots, but its leaders are moderate and the powerful military is viewed as a champion of secular rule.

"I invite you to become Muslims," Ilhan said in his address, reflecting his belief that most Turks are not devout followers of Islam. "I invite you to Allah's religion, Islam."

Prosecutors have demanded life imprisonment for al-Saqa, 32, who is accused of giving Turkish militants about US$170,000 to carry out the attacks, and four other defendants believed to be ringleaders, including Ilhan.

Police say some suspected ringleaders fled the country after the attacks, and some reportedly died in Iraq while fighting U.S. forces.

Prosecutors said Osama bin Laden had personally ordered al-Saqa to organize the plot, even though some suspects have testified that al-Qaida was unhappy that the group abandoned an initial plan to attack a base used by the U.S. air force, and instead went after targets that involved killing Muslims.

Al-Saqa was arrested in the southern port city of Antalya in 2005, after explosives accidentally went off in a building he was using as a safe house, forcing him to flee. Turkish authorities say al-Saqa planned to blow up Israeli cruise ships in the Mediterranean, reports AP.

The Syrian has said he led militants to fight Americans in Iraq, but never planned any attacks in Turkey.

Al-Saqa was sentenced in absentia by Jordan in 2002, along with Abu Musab al-Zarqawi, the al-Qaida leader in Iraq who was killed in a U.S. air raid, for a failed plot to attack Americans and Israelis in Jordan with poison gas during millennium celebrations.

As the trial in Turkey drew to a close, Spain began trying 29 suspects in the 2004 Madrid terrorist attacks on Thursday, with the alleged mastermind in that case saying he had no involvement in the Madrid attacks. There is no known link between the Istanbul and Madrid bombings.