Women should wear chastity belts to prevent rape, incest and other sex crimes, a prominent Islamic cleric in northern Malaysia was quoted as saying Friday. 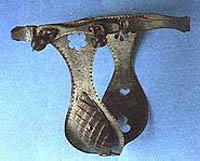 Abu Hassan Din Al-Hafiz, speaking in the northern state of Terengganu, said chastity belts could protect women from a growing number of sex crimes in Malaysia, The Star newspaper reported.

"The best way to avert sex perpetrators is to wear protection," Abu Hassan told a crowd of followers. "My intention is not to offend women but to safeguard them from sex maniacs."

The cleric said sex crimes had increased in the region of late. "We have even come across a number of unusual sex cases where even senior citizens and children are not spared," he said.

Figures on sexual assaults in the northern state were not immediately available, the AP reports.

Religious leaders in Malaysia's conservative north have in the past blamed sexual attacks on women wearing provocative clothing and make up. Local Islamic women's groups and other organizations have routinely criticized those views.

Muslims make up about 60 percent of Malaysia's population. The remaining 40 percent are Buddhists, Hindus, Christians and a small minority of indigenous people who practice animism.