Malaysia's air force said Friday it expects to receive six Russian Sukhoi-30MK fighter jets in May - the first batch of 18 jets it purchased in 2003. 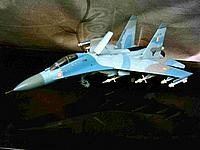 "It is anticipated that the first batch of Sukhoi-30MKs will be officially handed over to the Malaysian government in April 2007 in Russia, with the physical arrival in the country beginning May," the Royal Malaysian Air Force said in a statement.

The arrival of the jets - bought in a deal worth US$900 million (EUR 750 million) - is "neither premature nor delayed," it said, denying a local news report that the delivery had been pushed back by a year.

The New Straits Times newspaper reported Thursday that the jets would be delayed partly because Malaysia had asked for some Israeli components to be replaced with parts made in other countries.

The newspaper quoted unidentified sources as saying that Russian and French-made avionics had replaced an Indian-Israeli-French combination, while an Israeli electronic countermeasure system was changed to a South Africa version.

Malaysia does not have diplomatic or trade ties with Israel.

But air force public relations officer Zulkiflee Abdul Latiff said the use of Israeli components was not an issue. "The fittings are made according to RMAF requirements," he said.

The purchase of the 18 Sukhoi-30s will make Malaysia one of the largest operators of the high-tech jet in the region after India and Vietnam, officials said. Indonesia has ordered 12, while Thailand is mulling a possible purchase.