NATO nations must work in partnership with Russia on security matters, U.S. Defense Secretary Robert Gates said on Sunday, a day after President Vladimir Putin blasted Washington's foreign policy and accused it of fomenting a series of wars. 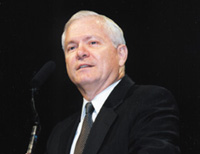 "We all face many common problems and challenges that must be addressed in partnership with other countries, including Russia," Gates told a security forum attracting senior officials from around the world. "One Cold War was quite enough."

On Saturday, Putin told delegates that the Bush administration had "overstepped its national borders in every way" through its "unilateral, illegitimate" actions. In a harshly worded speech, Putin also blamed U.S. policy for inciting other countries to seek nuclear weapons to defend themselves from an "almost uncontained use of military force."

In the fiercest criticism of Washington's policies during his seven years in office, Putin said Washington was destroying the international legal system by ignoring the United Nations and resorting to the unilateral use of force.

The issue of whether a Washington's policies were stoking a new Cold War has dominated the three-day gathering of 250 ministers, military and security officials from around the world.

Gates said Putin's speech had reminded him of the Cold War period, but said it was time to move on.

"Russia is a partner in endeavors," he said. "I think no one wants a new Cold War with Russia."

"But we wonder, too, about some Russian policies that seem to work against international stability, such as its arms transfers and its temptation to use energy resources for political coercion," he said.

Gates noted that the war in Afghanistan was testing NATO's ability to overcome a major global challenge.

"The challenge posed by violent extremism today is unlike anything the West has faced in many generations," he said. "In many ways it is grounded in a profound alienation from the foundations of the modern world - religious toleration, freedom of expression and equality for women.

But Viktor Ozerov, the head of the defense committee in Russia's upper house of parliament, questioned whether the United States was seeking a new Cold War. Ozerov cited Gates' comments to Congress last week in which he said the United States could not predict developments in places like Russia, North Korea, China and Iran.

Ozerov also cited the so-called Jackson-Vanick amendment - which places restrictions on U.S. relations with Russia - imposed in 1974 to expedite the emigration of Jews from the Soviet Union to Israel. Despite efforts by the Bush administration, Congress has not yet repealed the amendment as it applies to Russia but has done so in the case of several other former members of the Soviet Union, the AP reports.

"When you say that we have to adopt the values of the West, we are prepared to move to them - but not all of them if such values say you can deliver military blows outside the resolutions of the U.N. Security Council," Ozerov said.

"None of us find it easy to switch from the Cold War phase to shared global responsibility," German Foreign Minister Frank-Walter Steinmeier said.

But Steinmeier also took a swipe at the United States. "Many in the U.S. are now learning that democracy cannot be imposed by military force," he said.

Still, in a comment directed at the widespread domestic anti-militaristic feelings, Steinmeier said Germans need to realize that when diplomacy fails, military action is sometimes necessary.

"Many of us are highly uncomfortable when we realize that international responsibility ... means using force when other means are exhausted."