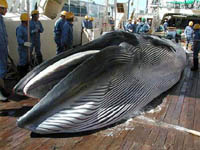 The Japanese ship, the Kaiko Maru, issued a distress signal after the clash but had not responded to Sea Shepherd's offer of help, said Paul Watson, the founder of the conservation group.

Watson said the Sea Shepherd ship, Robert Hunter, was hit twice by the Kaiko Maru on Monday after the conservationists tried to stop the Japanese ship from reaching a pod of whales.

"Robert Hunter was struck in the stern. We have a three foot gash in the hull above the water line," he said by telephone from the ship. No one aboard the ship was injured, the AP reports.

He said the Kaiko Maru then issued a distress signal. In communications between the two ships, Japanese crew had indicated the ship had a propeller problem, which was "vibrating," Watson said.

"We responded to the distress signal and offered to send down a diver," but the Japanese had not responded, Watson said.