Authorities were investigating Friday whether a bird flu outbreak at a British turkey farm was caused by a failure to follow food safety procedures. 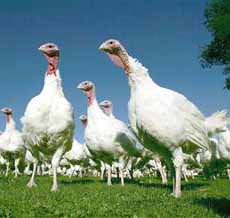 The Food Standards Agency also said it was investigating whether bird flu-affected poultry had entered the human food supply, but said it had no plans at present to recall turkey products. It said poultry was not a health risk if cooked properly.

Environment Minister Ben Bradshaw said the government was investigating whether there were "bio-security breaches" at the farm, owned by Bernard Matthews PLC, Europe's biggest turkey producer.

The Department of Environment, Food and Rural Affairs, or DEFRA, said it was examining the transfer of partly processed birds from a Hungarian plant to the company's farm in Holton, about 130 miles (210 kilometers) northeast of London.

A department spokeswoman said preliminary inquiries indicated the strain of H5N1 bird flu found at the Holton farm was identical to one found last month in Hungary.

The Hungarian H5N1 strain was found in geese and was the first known case within the 27-nation EU since August last year.

"We are investigating reports that there may have been some bio-security breaches at the plant," Bradshaw told reporters after the government's crisis committee, code-named COBRA, met Friday to discuss the outbreak.

He declined to elaborate, saying legal action could follow.

Bernard Matthews said in a statement that it had suspended all shipments between Britain and Hungary.

"We are co-operating fully and as a precautionary measure we have volunteered to cease any movements to and from Hungary," the company said.

DEFRA said the British and Hungarian plants were linked, but could not confirm whether the Hungarian facility was owned by Bernard Matthews.

"Around 38 tons of partly processed turkeys are transported from a linked Hungarian plant to the Suffolk farm each week," the DEFRA spokeswoman said on customary condition of anonymity in line with policy.

She said signs of H5N1 had been found in birds housed in four turkey sheds at the Holton farm, following the discovery of the virus. Initially, officials said only one shed was affected, reports AP.

A total of 159,000 turkeys were slaughtered after the outbreak in eastern England, but officials have said there are "negligible" risks to the public and poultry industry. Several countries, however, have banned British poultry imports in response.

Bird flu has killed or prompted the culling of millions of birds worldwide since late 2003, when it began ravaging Asian poultry stocks. It has killed at least 165 people worldwide, but remains difficult for humans to catch.

Experts fear it could mutate into a form that spreads easily among people, potentially sparking a pandemic. H5N1 is primarily an animal disease and experts believe humans are only at risk if they come into very close contact with infected birds.