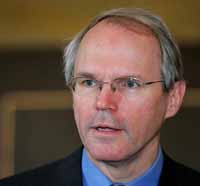 The main U.S. envoy to talks on North Korea's nuclear program said Friday that all sides agreed on broader issues in a draft proposal for Pyongyang to disarm, but that disputes remained over finer points.

Hill said that the remaining issues to be resolved were contained in a single paragraph of the Chinese draft and that they were working on rewriting to address North Korea's concerns. He did not give any details, reports AP.

Separately, Japan's envoy Kenichiro Sasae said while there was consensus on some points, there was no prospect of an agreement at the current time.