Anna Nicole Smith, the curvaceous blonde whose life played out as an extraordinary tabloid tale - Playboy centerfold, jeans model, bride of an octogenarian oil tycoon, reality-show subject, tragic mother - has died after collapsing at a hotel. She was 39. 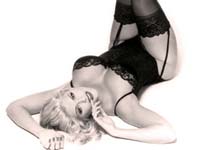 She was stricken while staying at the Seminole Hard Rock Hotel and Casino and was rushed to a hospital Thursday. Edwina Johnson, chief investigator for the Broward County Medical Examiner's Office, said the cause of death was under investigation and an autopsy would be done on Friday.

Just five months ago, Smith's 20-year-old son, Daniel, died suddenly in the Bahamas in what was believed to be a drug-related death.

Seminole Police Chief Charlie Tiger said a private nurse called paramedics after finding Smith unresponsive in her sixth-floor room at the hotel, which is on an Indian reservation. He said Smith's bodyguard administered CPR, but she was declared dead at a hospital. Later Thursday, two sheriff's deputies carried out at least eight brown paper bags sealed with red evidence tape from Smith's hotel room.

Dr. Joshua Perper, the chief Broward County medical examiner who will perform the autopsy, said if her death was from natural causes, the findings would likely be announced quickly. He cautioned, however, that definitive results could take weeks.

Through the '90s and into the new century, Smith was famous for being famous, a pop-culture punchline because of her up-and-down weight, her Marilyn Monroe looks, her exaggerated curves, her little-girl voice, her ditzy-blonde persona, and her over-the-top revealing outfits.

Recently, she lost a reported 69 pounds (31 kilograms) and became a spokeswoman for TrimSpa, a weight-loss supplement. On her reality show and other recent TV appearances, her speech was often slurred and she seemed out of it. Some critics said she seemed drugged-out.

"Undoubtedly it will be found at the end of the day that drugs featured in her death as they did in the death of poor Daniel," said a former attorney for Smith in the Bahamas, Michael Scott.

Another former Smith attorney, Lenard Leeds, told the celebrity gossip Web site TMZ that Smith "always had problems with her weight going up and down, and there's no question she used alcohol." Leeds said it was no secret that "she had a very troubled life" and had "so many, many problems."

Smith attorney Ron Rale told The Associated Press that he had talked to her on Tuesday or Wednesday, and she had flu symptoms and a fever and was still grieving over her son. He dismissed claims her death was related to drugs as "a bunch of nonsense."

"Poor Anna Nicole," he said. "She's been the underdog. She's been besieged ... and she's been trying her best and nobody should have to endure what she's endured."

The Texas-born Smith was a topless dancer at strip club before she entered her photos in a search contest and made the cover of Playboy magazine in 1992. She became Playboy's playmate of the year in 1993. She was also signed to a contract with Guess jeans, appearing in TV commercials, billboards and magazine ads.

In 1994, she married 89-year-old oil tycoon J. Howard Marshall II, owner of Great Northern Oil Co., whom she met at what she calleda "gentleman's club" in Houston. In 1992, Forbes magazine estimated his wealth at $550 million.

Marshall died in 1995 at age 90, setting off a feud with Smith's former stepson, E. Pierce Marshall, over his estate. A federal court in California awarded Smith $474 million. That was later overturned. But in May, the U.S. Supreme Court revived her case, ruling that she deserved another day in court.

The stepson died June 20 at age 67. But the family said the court fight would continue.

Smith starred in her own reality TV series, "The Anna Nicole Show," in 2002-04. Cameras followed her around as she sparred with her lawyer, hung out with her personal assistant and interior decorator, and cooed at her poodle, Sugar Pie. She also appeared in movies, performing a bit part in "The Hudsucker Proxy" in 1994.

Smith's son died Sept. 10 in his mother's hospital room in the Bahamas, just days after she gave birth to a daughter.

An American medical examiner hired by the family, Cyril Wecht, said he died accidentally of a combination of methadone and two antidepressants. Last month, a Bahamas magistrate scheduled a formal inquiry into the death for March 27.

Meanwhile, the paternity of Smith's now 5-month-old daughter remained a matter of dispute. The birth certificate lists Dannielynn's father as attorney Howard K. Stern, Smith's most recent companion. Smith's ex-boyfriend Larry Birkhead was waging a legal challenge, saying he was the father. An emergency hearing in the paternity case was scheduled for Friday in Los Angeles.

Lawyers were expected to discuss an emergency motion filed by Birkhead's attorney seeking DNA from Smith's body, Rale said. The reasons for the motion were not immediately clear, but an attorney for Stern, James T. Neavitt, was frustrated.

"There's no question about her being the mother," he said. "So what's the purpose of the DNA testing? Why do they need her DNA?"

Debra Opri, the attorney who filed Birkhead's paternity suit, said only that doctors told her to get a DNA sample, declining to elaborate.

She said Birkhead was devastated. "He is inconsolable, and we are taking steps now to protect the DNA testing of the child. The child is our No. 1 priority," she said.

The legal complications of Smith's estate could take years to unravel, an expert said. Christopher Cline of the law firm Holland and Knight, who is an estate planning specialist, said he has never seen a case "with more moving parts."

Outstanding questions include not only the paternity of her daughter, but if she died with a will and how her death will affect the lawsuit pending against the Marshall estate. It also wasn't clear where she legally lived when she died.

Smith was born Vickie Lynn Hogan on Nov. 28, 1967, in Houston, one of six children. Her parents split up when she was a toddler, and she was raised by her mother, a deputy sheriff, the AP reports.

She dropped out of high school after she was expelled for fighting, and worked as a waitress and then a cook at Jim's Krispy Fried Chicken restaurant in Mexia.