Groundhog does not see his shadow, predicts an early spring ahead

A new pair of hands pulled Punxsutawney Phil from his stump this year, so it was only fitting that the groundhog offered a new prediction. 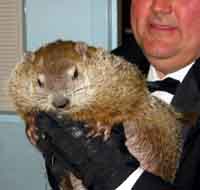 Groundhog does not see his shadow, predicts an early spring ahead

Phil did not see his shadow on Friday which, according to German folklore, means folks can expect an early spring instead of six more weeks of winter.

Since 1886, Phil has seen his shadow 96 times, has not seen it 14 times and there are no records for nine years, according to the Punxsutawney Groundhog Club. The last time Phil failed to see his shadow was in 1999.

More than 15,000 revelers milled about in a misty snow waiting for the prediction, as fireworks exploded overhead and the "Pennsylvania Polka" and other music blared in the background.

Each Feb. 2, thousands of people descend on Punxsutawney, a town of about 6,100 people about 65 miles (105 kilometers) northeast of Pittsburgh, Pennsylvania, to celebrate what had essentially been a German superstition.

The Germans believed that if a hibernating animal cast a shadow on Feb. 2 the Christian holiday of Candlemas winter would last another six weeks. If no shadow was seen, legend said spring would come early.